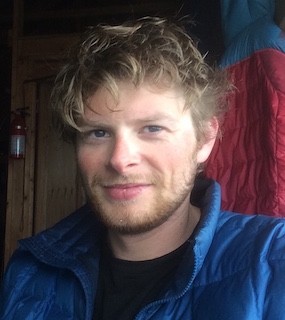 I grew up in Reading UK, 20 minutes by train from London. I went to Chiltern Edge Secondary School (11-16yrs) and Henley Sixth Form College (17-18yrs).

After two years of working and backpacking I went to The University of York, UK, and did a Physics BSc. My final year project was on the nucleation of freezing in supercooled water, supervised by Dr Richard Keesing. We scattered a laser through droplets of supercooled water to observed freezing as it was initiated by the application of an electric field.

Between 2009 and 2013 I did PhD in glaciology in the Department of Geography, Sheffield University, supervised by Dr Felix Ng. My thesis was entitled 'Modeling ice-dammed lake drainage' (pdf). I used mathematical models to study how water flows beneath glacier (see research section).

Between 2013 and 2016, was a Glacier Geophysicist at the British Antarctic Survey (BAS), Cambridge, UK. I was employed on a NERC-funded project led by Richard Hindmarsh. We used radar and mathematical models to study present-day and past ice flow in West Antarctica.

In March 2016 my wife and I moved from the UK and I started my current position as Assistant Professor in the Department of Earth and Environmental Sciences, Columbia University, and the Lamont-Doherty Earth Observatory.

My research is concerned with obtaining a better understanding of glacial processes to improve predictions of ice-sheet evolution.

I advise a group of students and post-docs using remote-sensing, mathematical modeling and fieldwork to better understand glacial processes.