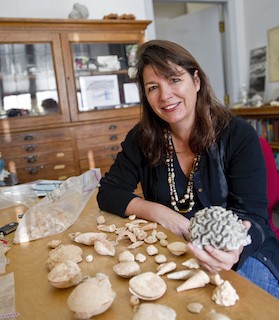 Maureen E. Raymo is the G. Unger Vetlesen Professor in DEES, Director of the Lamont-Doherty Core Repository, and Interim Director of Lamont-Doherty Earth Observatory at Columbia University. Maureen has long been a pioneer in the study of climate change over Earth’s history. In addition to publishing foundational work on the stratigraphy and chronology of recent geologic epochs, Raymo has proposed hypotheses explaining why ice ages occur in Earth’s history, why ice sheets wax and wane with characteristic frequencies over the last few million years, and developed new ways of studying past sea level change. According to the European Geosciences Union which recognized her accomplishments with the Milankovic Medal, “Maureen E. Raymo’s work has given names to critical, foundational ideas: the ‘uplift-weathering hypothesis’, the ‘41-thousand-year problem’, ‘Pliocene sea level paradox’, and ‘the Lisiecki-Raymo δ18O Stack’ are all central themes in palaeoceanography that appear in textbooks and have their roots in Raymo’s research and intellectual contributions.” Maureen’s work, firmly based on observations and data, has shaped our understanding of Earth’s natural climate variability and her many landmark papers have influenced a generation of climate scientists.

Maureen has spent years carrying out research in the field—planning, participating in and leading numerous scientific expeditions around the world, on land, sea and ice. She is a fellow of The Explorers Club and a member of the National Academy of Sciences, one of the highest honors given to scientists in the United States. In 2014, she became the first woman to be awarded the Wollaston Medal, the Geological Society of London’s most senior medal and highest accolade, first awarded to William Smith in 1831 and later to Charles Darwin, Louis Agassiz, and Charles Lyell. She was recently awarded the Maurice Ewing Medal by the American Geophysical Union and U. S. Navy.

Maureen speaks widely, to audiences ranging from scientists, to student groups, to the general public, on topics ranging from her latest research to the much broader problem of global climate change. Her talks are always informative and inspiring with the twin goals of empowering individuals through a better understanding climate science and motivating action on behalf of our shared global environment.