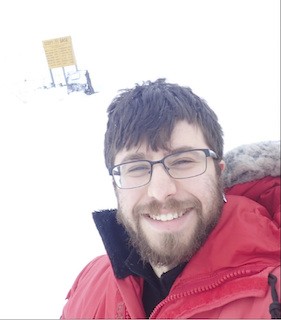 Julian Spergel has been interested in stories of polar exploration since he was young. His current research focuses on surface meltwater drainage on the Antarctic ice sheet. The accumulation of surface meltwater in Antarctica has been found to be more widespread around the continent than previously thought.  Many theorize that meltwater may play a large role in the stability of floating ice shelves on the edges of Antarctica.  Julian Spergel’s project goals are to understand how meltwater systems have evolved and will evolve, and how this will affect ice shelves.  Using satellite data, he maps and characterizes how Antarctica’s surface meltwater systems evolve in order to determine what happens to Antarctica’s streams and ponds as ice flows faster and global climate warms.

He continues to be a voracious reader of science fiction and polar exploration journals. He joined Jonathan Kingslake’s research group as his first grad student in fall of 2016. Since then, he has had the opportunity to travel to McMurdo Station, Antarctica in 2017 for ROSETTA-ICE’s third field season. He enjoys sharing his love of the polar regions through public outreach to K-12 students and senior ongoing learning programs, as well as through blogging.